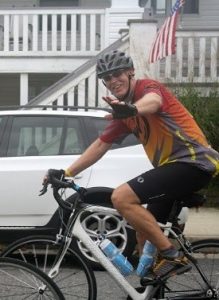 Adventure of a lifetime, and a personal goal are just a couple reasons Stephen Warner, a  Principal with Woodstown, NJ office of BKC, CPAs, is going to cycle across the United States. On Mother’s day, May 13th, 2018, starting in Los Angeles California, he will embark on his 3,415 mile journey. He and 22 other men and women from across the United States and other Countries, will bike this seven-week long coast to coast journey that ends on June 30 in Boston Massachusetts.   You can follow Stephen’s coast to coast adventure on our website blog.

Check back to our blog for updates to his trip map and calendar here.  Check for updates at http://www.bkc-cpa.com/?s=stephen+warner+cross+country

Stephen says it is very special that this journey starts on Mother’s Day, because he is dedicating his cross-country journey in memory of his mother, Doris Warner and his brother Michael Warner who both had MS. Michael passed away April, 2018. In fact, the interest in cycling for Stephen started when he signed up for his first MS City to Shore Bike Ride 16 years ago. He was so inspired by how much the MS City to Shore Bike Ride fundraiser helps all those affected by Multiple Sclerosis that he created the Warner’s Wheelers Team which is celebrating their 11th year riding this upcoming September. The Warner’s Wheelers Team rides to honor all those affected by MS, especially the Team’s Champion, Michael Warner. In the last ten years the Warner’s Wheelers Team has raised over $250,000 for a world free of Multiple Sclerosis!

Although Stephen’s coast to coast bike journey is not a fundraiser, any donations to the Warner’s Wheelers Team would be appreciated. Stephen asked that you please make the donation to MS Society in Honor of our Champion, Michael Warner.  Visit http://bit.ly/SteveforMS to make a donation to  the MS Society in Memory of Michael Warner, or mail to Warner’s Wheelers, 34 East Avenue, Woodstown, NJ 08098

Check for updates at http://www.bkc-cpa.com/?s=stephen+warner+cross+country