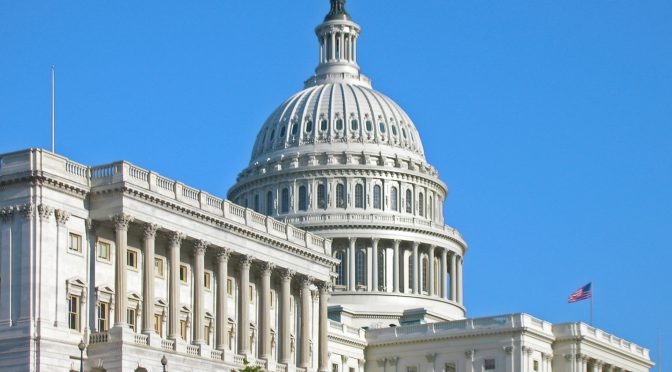 President Trump, on Friday, signed his first major legislative victory, a $1.5 trillion tax overhaul expected to trigger tax cuts for most Americans.  Trump signed the bill before heading to his Mar-a-Lago resort in Palm Beach, Fla., for the winter holidays.

On December 20, 2017, Congress passed The Tax Cuts and Jobs Act, “TTCAJA”, securing President Trump’s first legislative victory as President.  The legislation is the biggest tax rewrite in decades, and slashes the corporate tax rate for the first time in 30 years, overhauls the taxation of both small and large businesses and reduces rates on individuals.   President Trump is expected to sign the bill in the coming days.

The final bill reflects compromises that were made between House and Senate Republicans, including a 21% corporate tax rate that will be effective in 2018, a 37% top individual income tax rate that will apply to joint filers with annual incomes of over $600,000 and a deduction for pass-through business owners of 20%.  Additional highlights of the “TTCAJA” include:

• State and local tax deductions will remain in place but will be capped at $10,000 for state and local sales, income and property taxes. (NOTE) amounts paid in 2017 for state or local income tax which is imposed for the 2018 tax year will be treated as paid in 2018.

• The principal cap on deductible home mortgage interest for new mortgages (after December 15, 2017) is reduced immediately from $1 million to $750,000 (reverting to $1 million after 2025 regardless of when the mortgage was entered into), and the deduction is retained for second homes but will no longer be available for home equity lines of credit.

• The 50% AGI limitation for charitable contributions is increased to 60%.

• The individual mandate tax penalty is repealed starting in 2019.

• Section 179 expensing is increased to $1 million for “qualified property” (i.e. tangible personal property used in a trade or business) placed in service in tax years beginning after 2017, with a phase-out beginning at $2.5 million.

• Like-kind exchanges are limited to those involving real property only.

• The domestic production activities deduction (aka DPAD) relating to deductions for qualifying receipts derived from certain activities performed in the United States is repealed for tax years after 2017.

• Expenses paid for (i) entertainment activities and membership dues, and (ii) transportation or commuting expenses of employees will no longer be deductible after 2017.

What is NOT in the Law

It is no surprise that compromises were made to finalize many of the big-ticket changes that were treated differently in the House and Senate bills like the SALT deduction and the corporate tax rate. What did surprise some folks however, is that some of the changes that were in the House and Senate bills did NOT make it to the new “law”, including:

• Graduate students who work as research or teaching assistants are still exempt from income tax on tuition waivers they receive in exchange for that work.

• There are no changes to the American Opportunity Credit (AOC) or the Lifetime Learning Credit (LLC).

• The first-in first-out provision for computing basis with regard to securities transactions that was in the Senate bill is not in the new “law”.

• The deductions for student loan interest and out-of-pocket teacher expenses will be retained with the current caps.

• The Conferees chose not to repeal the tax credit for new, 4-wheeled, battery powered electric vehicles.

A key aspect to the Tax Cuts and Jobs Act is that all of the changes are prospective except for a select few items which will take effect before 12/31/17.  They include:

As with most sweeping pieces of legislation, the devil is in the details.  Here are some of the broader areas that have been overhauled in the Tax Cuts and Jobs Act:

For tax years 2018 through 2025, the following rates would apply to individual taxpayers:

For tax years after 2017 and before 2026, individuals are allowed to deduct 20% of “qualified business income” from a partnership, S corporation, or sole proprietorships, as well as 20% of qualified real estate investment trust (REIT) dividends, qualified cooperative dividends, and qualified publicly traded partnership income.

For these purposes, “qualified business income” would mean the net amount of qualified items of income, gain, deduction, and loss with respect to the qualified trade or business of the taxpayer. These items must be effectively connected with the conduct of a trade or business within the United States. They do not include specified investment-related income, deductions, or losses.

“Qualified business income” does not include an S corporation shareholder’s reasonable compensation, guaranteed payments, or—to the extent provided in regulations—payments to a partner who is acting in a capacity other than his or her capacity as a partner.

“Specified service trades or businesses” include any trade or business in the fields of accounting, health, law, consulting, athletics, financial services, brokerage services, or any business where the principal asset of the business is the reputation or skill of one or more of its employees.

The exclusion from the definition of a qualified business for specified service trades or businesses phases in for a taxpayer with taxable income in excess of $157,500 or $315,000 in the case of a joint return.

For certain partnership interests held in connection with the performance of certain services, the new law follows the Senate amendment and the House bill in imposing a three-year holding period to treat capital gain as long-term capital gain. The provision is effective for taxable years beginning after December 31, 2017.

For losses arising in tax years beginning after 2017, the NOL deduction is limited to 80% of taxable income, compared to the Senate bill that provided for 90% until 2022 and 80% thereafter. The carryback provisions are repealed, except for losses incurred in a farming trade or business that would be allowed a two-year carryback and NOLs of a property and casualty company that would continue to be subject to a two-year carryback and 20-year carryforward. For others, an indefinite carryforward is now allowed.

“TTCAJA”  exempts 100% of the foreign-source portion of dividends received by a US corporation from a foreign corporation. No foreign tax credit or deduction is allowed for any taxes paid or accrued with respect to any portion of a distribution treated as a dividend that qualifies as a DRD.

“TTCAJA”  provides a one-time transitional tax on a US 10%-shareholder’s pro rata share of the foreign corporation’s post 1986 tax-deferred earnings, at the rate of either 15.5% (in the case of accumulated earnings held in cash, cash equivalents or certain other short-term assets) or 8% (in the case of accumulated earnings invested in illiquid assets (e.g., property, plant and equipment). A foreign corporation’s post-1986 tax-deferred earnings would be the greater of the earnings as of November 2, 2017 or December 31, 2017. The portion of post-1986 earning and profits subject to the transition tax does not include earnings and profits that were accumulated by a foreign company prior to attaining its status as a specified foreign corporation.

“TTCAJA” imposes a tax on a US shareholder’s aggregate net CFC income that is treated as global intangible low-taxed income (GILTI). GILTI is gross income in excess of extraordinary returns from tangible depreciable assets excluding effectively connected income (ECI), subpart F income, high taxed income, dividends from related parties, and foreign oil and gas extraction income. The extraordinary return base is equal to 10% of the CFCs’ aggregate adjusted basis in depreciable tangible property. Only 80% of the foreign taxes paid on the income is allowed as a foreign tax credit. All CFCs are aggregated for purposes of the computation. For taxable years beginning after December 31, 2017 and before January 1, 2026 the highest effective tax rate on GILTI is 10.5%. For taxable years beginning after December 31, 2025 the effective tax rate on GILTI is 13.125%.

“TTCAJA” maintains the tax incentive in the Senate bill for US companies to earn intangible income from exploiting US intangibles abroad. Income from foreign derived intangible income (FDII) for taxable years beginning after December 31, 2017 and before January 1, 2026 is provided an effective tax rate of 13.125%. For taxable years beginning after December 31, 2025, the effective tax rate on FDII is 16.406%.

• The $5 million annual gross receipts threshold for the use of the cash method of accounting for corporations (and partnerships with a corporate partner) is increased to $25 million and indexed to inflation.

• Repeals the special rule that allows IRA contributions to one type of IRA (traditional or Roth) to be recharacterized as a contribution to the other type with a modification. Under the provision, recharacterization cannot be used to unwind a Roth conversion, but is still permitted with respect to other contributions, including recharacterizing new Roth contributions. The provision is effective for taxable years beginning after December 31, 2017.

• For any divorce or separation agreement executed after December 31, 2018, “TTCAJA” provides that alimony and separate maintenance payments are not deductible by the payor spouse. It also repeals the provisions that provide that such payments are includible in income by the payee spouse. The change applies to any divorce or separation instrument executed or modified after December 31, 2018 (the modification must expressly state that the new rule applies).

• Taxpayers can only take a deduction for casualty losses if the loss is attributable to a presidentially declared disaster.

• Up to $10,000 of 529 savings plans can be used per student for public, private and religious elementary and secondary schools, as well as home school students.

• The ownership period for the exclusion of gain from the sale of a principal residence stays at 2 out of the 5 previous years. However, the exclusion would only be available once every 5 years instead of every 2 years.

• “TTCAJA” doubles the estate and gift tax exemption for estates of decedents dying and gifts made after December. 31, 2017, and before January. 1, 2026. The basic exclusion amount provided in Sec. 2010(c)(3) increases from $5 million to $10 million and would be indexed for inflation occurring after 2011.

Now that we know that The Tax Cuts and Jobs Act will be the law of the land, we can start concentrating on how these new laws will affect taxpayers.  Sweeping changes to international tax law, how pass-through income is taxed, and new, individual income tax regulations, promise to keep business and individual taxpayers alike busy trying to decipher how these new tax laws will affect them.

President Trump might not actually sign the landmark bill into law right away in fact, Trump might wait until the new year, pushing the outer boundary of the 10 days the Constitution gives the President to affix his signature to legislation passed by Congress.

The reason for the possible delay involves a complicated bit of legislative gamesmanship. Under a 2010 “pay-as-you-go” law requiring Congress to offset any new spending or lower taxes, the $1.5 trillion bill would trigger automatic cuts to Medicare and other programs—across-the-board reductions that Republicans don’t want to be responsible for letting take effect. Bywaiting until the calendar turns to 2018 to formally enact the tax bill, Trump would push the automatic spending cuts to 2019 and buy Congress another year to waive them.

BKC will continue to provide timely analysis of The Tax Cuts and Jobs Act as we move forward into the new year.